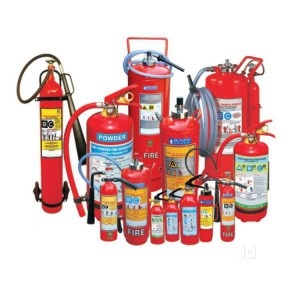 Fire is a rapid chemical reaction of oxidant with fuel accompanied by the release of energy, indicated by incandescence or flame.

For a fire to happen, the following elements are essential • • Oxidiser to sustain combustion. • Heat to reach ignition temperature. • Fuel or combustible material. This results in a chemical chain reaction which starts a fire. Removing any of these elements will extinguish the fire.

In a flammable liquid fire, it is the vapours released from the surface of the liquid that burns. Flash point is the lowest temperature at which a liquid produces enough vapor to form an ignitable mixture. E.g., Diethyl ether (-45 O C) Methyl alcohol (11.1 O C) Lower the flash point of a flammable liquid, greater the hazard.

CO2 is not suitable for fires involving metals. • It’s principal advantage is that it does not leave any residue. • Can be used on electrical/electronic equipment.

• It develops a floating aqueous film of solution under the foam on fuel surface and cool the burning surface. • AFF extinguishers must not be used on electrical and metal fires.

• The powder also interrupts the chemical chain reaction of fire. • The disadvantage is that it leaves residue particularly making it difficult to clean up in case of sensitive equipment.

For any kind of query, contact us with the details below.

Please fill in your info and we will contact you soon.